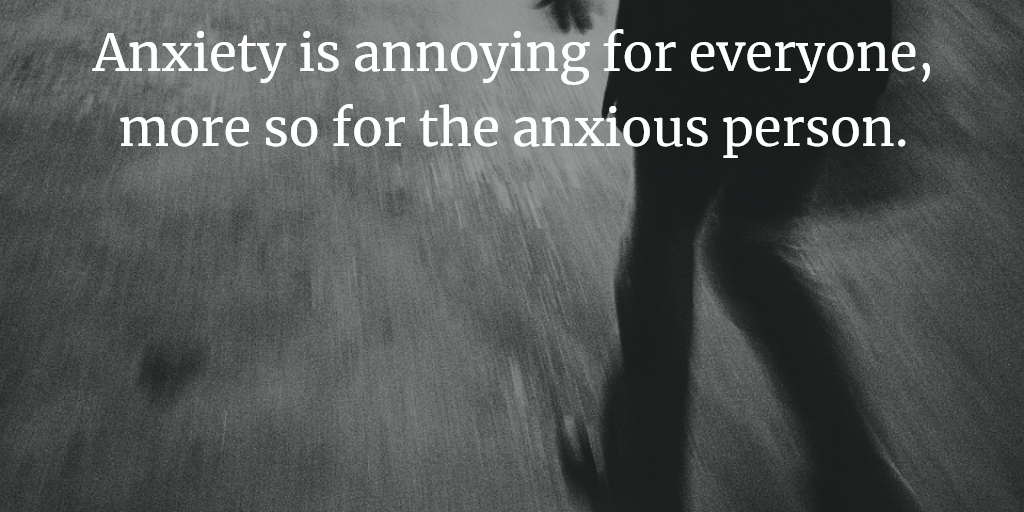 So many of us suffer these things and don't get help. Life doesn't have to be this hard.

I suffered with Anxiety for 37 years before I got help.  I used to be crushed by life.  I hated making phonecalls, I felt frustrated that I didn't seem to be going anywhere in life, I overthought everything and stuff kept playing around in my head for ages.  From the age of about 14 it would take me 2 - 3 hours to get to sleep at night and I lived in a constant state of tiredness.  I was hard on myself and beat myself up over everything and I could never see any good in myself.  Social situations were a real challenge.  I would get a knot and a dread in my stomach before going out with friends and classrooms were even worse.  I had poor concentration and always felt stupid.  In a word, I had a bad case of Anxiety and also suffered Depression because of it.

It was all I knew.  I didn't know life could be any different.  This was what it was and I just had to soldier on through.  Until the day I got help, almost by accident.  My life changed utterly.  All the things I could never do before, or couldn't enjoy before suddenly were possible and full of pleasure.  I felt liberated and full of potential.  The old fear and knot in the gut were gone.  I discovered I had drive and ambition and I could face crowds and public speaking without any terror - in fact I enjoyed it.  Best of all - I didn't have to believe that this change could happen, it happened anyway.  I can never thank enough, the Therapist that made all this possible for me.  I have now trained in the methods that work for reducing Anxiety and want to help as many people as I can, rediscover how great life can be.

Sometimes the Fear is worse.  Sometimes, we can't leave our homes, or ride in cars, or fly, or be in other situations that trigger a trauma response.  Flashbacks, inability to live certain areas in our lives, suicidal thoughts, all of these things are our brain's response to real episodes of danger that previously occurred and is now setting off these signals when the danger is no longer present.  So we are still physically and emotionally over-reacting to a danger that isn't there.  This can change.

EMDR (Eye Movement Desensitisation and Reprocessing) is a very specific method I have trained in which is used by the Irish Defence Forces, the US Military and most Nato Countries to overcome PTSD.  That's because it has been proven to work and is recommended for helping people with all kinds of Trauma, from the battlefield to grief from loss.